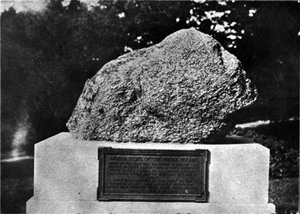 Oneida Castle is named for the Oneida Indians who were the first residents. Oneida legend says that the Oneida were led to these lands by following a moving stone; where it stopped, they settled. The name Onyota'a:ka means "The People of the Standing Stone". For many years, the Oneida Sacred Stone was in Forest Hill Cemetery in Utica. It was returned to the Oneidas in the 1970's.

In 1615, Champlain led an attack against the Oneidas at the Battle of Nichols Pond. Known as the Oneida Castle, it had high and thick walls, hence the term "castle". The Oneidas were well ahead of their time in the field of fortifications. The "castle" included such defenses as a water filled trough that ran through the walls to prevent fire. Champlain attempted to scale the walls and was unsuccessful. He built a wheeled platform and put his rifleman atop of this device. After hours of fighting, the Oneidas defeated the French.

Many Jesuit and Protestant missions to the Oneidas were unsuccessful. In 1766, Rev. Samuel Kirkland established a mission in Oneida Castle. Kirkland converted a large number of Oneidas to Christianity. His most notable convert was the great Oneida Chief Skenandoah. It was largely through this influence and friendship that the Oneidas allied with the Americans during the Revolutionary War. For his service to the colonists, Sam Kirkland was awarded a large tract of land (Kirkland, NY). There he established what is now Hamilton College in Clinton, NY. At the request of Skenandoah, he and Kirkland are buried near each other in the Hamiliton College Cemetery.

The present Oneida Castle was organized by statue in 1815 and laid out by Surveyors John and William Randel. The map names the village "Oneida Castleton". No one is sure of the reason, but some think it was to distinguish the town from the Oneida Indian Village.

In 1841 Oneida Castle was incorporated by an act of the Legislature. The Castle included property south and west of our current boundaries (Madison County). The Act provided that the place be known as Oneida Castle – the ton being dropped from the word Castleton.

Some fun facts about Oneida Castle: